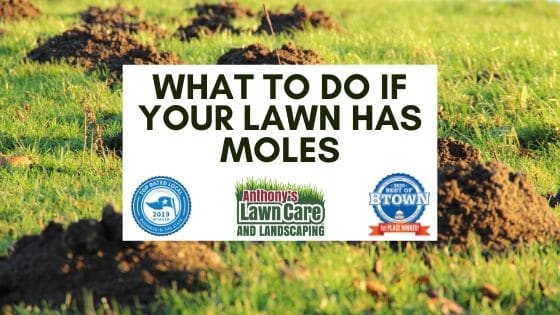 In the Bloomington, Indiana, area, moles and voles are commonly found in lawns. They are both potential pests for homeowners too because of their aggressive digging and tunneling. It’s important to know what you’re dealing with though in order to know how to respond. So let’s take a look at a few similarities and differences between the two little creatures.

Moles and voles are a similar size, with voles being about five inches long and moles six inches. They are also both mammals, although contrary to popular belief, moles are not rodents like voles are, but in a group called insectivores along with shrews.

They are also both fond of digging, and their tunnels can be an annoyance to those who want a pristine lawn but find little mounds dotting their yards.

The similarities really end right there though. Voles, also called meadow mice or field mice, are related to gerbils, and are true rodents. Voles breed in extremely high numbers, with up to 10 litters of multiple young a year. A small group of voles can quickly take over an area if their colony’s reproduction isn’t interrupted.

Moles on the other hand are odd-looking, velvety skinned and mostly blind, with flipper-like legs they use for digging deep tunnels. Moles also don’t breed in as high of numbers because they are generally loners with fewer opportunities to mate.

It’s unlikely that you’ll get to see both moles and voles in a police lineup though, so you’ll more likely have to identify them based on their tunnels.

Between the two, voles cause much more damage. Voles have very shallow tunnels that they use to get to the roots of plants, which are a major food source for them. This version of tunneling is destructive both because it leads to plants losing their roots and dying, but also because tunnels just below the surface are much more visible and ugly.

Moles often push up soil when they are creating their tunnels and need a place to put the excess dirt, but it’s less common for these hill to become a lonterm problem. The tunnels are far deeper underground, and they also do not eat the roots of plants. Moles, as insectivores, eat insects. Their tunnels are a trap for insects, who will fall into them. Moles have hearing good enough to detect a worm falling through their tunnel from a distance, and will quickly track them down and eat them.

What to do when you have moles or voles?

In Indiana, we have two types of moles — the eastern mole and the star-nosed mole. The star-nosed mole is not as common and is mostly in the northern part of the state, and is also less destructive. The eastern mole, while somewhat of a nuisance, may not be worth worrying about. Their tunnels are deep, they eat insects that may be harmful to your lawn and they don’t overwhelm their hosts with many offspring.

Voles, on the other hand, are a clear pest, and the longer they’re allowed to stay, the worse their presence might be for your lawn. As a Bloomington, Indiana, area lawn service, we’ve seen a lot of these little rodents over the years, as well as the damage they do. If you have questions on how to handle voles (or moles if you’d rather not have them around), we’re happy to give some suggestions. Call (812) 345-5694 for more information.