Is It Legal To Burn Brush and Debris in Bloomington Indiana? 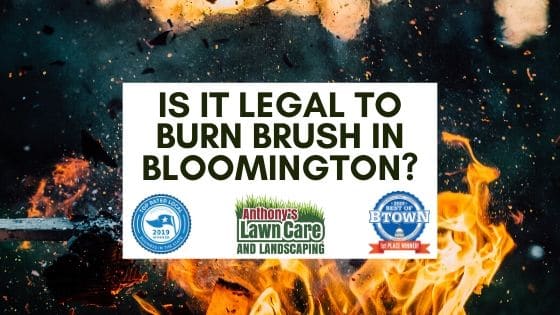 We’ve all seen people doing it, but is burning leaves, brush, trash and other debris legal in the Bloomington, Indiana, area? The answer, like most things in life, is not always simple.

The Indiana Department of Environmental Management (IDEM) is tasked, among many other things, with regulating open burning in the state in accordance with Indiana law. The laws regarding this are found in Title 13, Article 17, Chapter 9 as well as Title 326, Article 4, Rule 1 of the Indiana Administrative Code.

IDEM says open burning is generally illegal, but there are enough exceptions to this rule to make it more accurate to say, “It depends.”

Exceptions to open burn bans in Indiana include burning vegetation from a farm, orchard, nursery, tree farm, cemetery or drainage ditch. In an unincorporated area, vegetation can also be openly burned for maintenance of agricultural land. In these cases, you are not even required to receive any kind of permitting or other permission.

For those doing these kinds of open burns, they must comply with the conditions set out in the statute, like extinguishing the fire if it becomes nuisance or hazard, avoiding “unfavorable meteorological conditions such as high winds, temperature inversions, or air stagnation,” attending to the fire until it’s “completely extinguished,” not burning any asbestos,” and complying with other state and federal laws.

While that covers those living in unincorporated areas and on agricultural land, what about the rest of us? Maybe you just raked your lawn and want to know if you can burn the leaves. First, it is virtually always illegal to burn trash in Indiana. It can release harmful emissions, so unless you have express permission from IDEM, don’t do it.

According to IDEM, “Residential open burning is the burning of leaves, brush, paper, and other clean wood waste in a burn barrel at a private residence.” This residential open burning is banned under state law at apartments, condos, mobile home parks and any other building with five or more dwelling units, but otherwise allowed — unless a city or county bans it in local ordinances.

If, after all those regulations, you are still in the clear, the IDEM has some requirements you must follow for your open burn:

So, what about in Bloomington, Indiana?

If you live in the city limits of Bloomington, but have a property without five dwelling units, does that mean you can have an open burn? Well, that depends on the local ordinances, as state law said. And in the case of the Bloomington Municipal Code Fire Prevention Chapter 18.16 Open Burning Policy:

“No person shall kindle or maintain any bonfire or open burning, or authorize any such fire to be kindled or maintained within the city limits without permit or proper authorization from the fire chief. During construction or demolition of buildings or structures, no waste materials or rubbish shall be disposed of by burning on the premises or in the immediate vicinity without having obtained a permit or proper authorization. Any applicant for an open burning permit shall demonstrate that he/she is in legal control of the lot or parcel of land on which the burning is to be done.”

So it looks like that’s a no, unless you can get a permit from the fire chief. However, there is one exception in the code that says, “Exception: These restrictions do not prohibit outdoor fires in pits or grills used solely for the preparation of food. (Ord. 97-36 ‘ 26, 1997).”

If you burn wood, leaves and brush in a fire pit and plan on using the fire for cooking food, not just as a burn, is that allowed? Some unnamed locals say they burn brush in a firepit and keep hotdogs or S’more supplies nearby in case city authorities show up. While this could be a legal gray area, before trying to do something clever like that as a loophole, it’s probably best to call the Bloomington Fire Department at 812-332-9763 to get their opinion first on where they draw the line.